It seems that nowadays there’s a subscription box for everybody.
We wouldn’t be surprised if it was becoming one of the most inclusive industries simply because it is so easy to tap into niche markets and then create a box of goodies for that specific sub-culture.

Quick Navigation
There are subscriptions for foodies, wine-lovers, fashionistas – and geeks.
What is Loot Crate?
How Does it Work?
How Much Does Loot Crate Cost?
Public Perception
What We Think About Loot Crate

There Are Subscriptions For Foodies, Wine-Lovers, Fashionistas – And Geeks

And we aren’t saying that in a negative way.

It’s cool to be nerdy now. In the past couple of years, we’ve seen the comeback of shows like “X-Files” and games like Dungeons and Dragons (probably thanks to Stranger Things on Netflix). And anime, Marvel, and other fandom universes are bigger than ever.

And Loot Crate has definitely figured that out.

In fact, that figured that out a while ago (because let’s be honest, everybody is a geek in some way or another. It’s just cooler to be publicly open about it now).

This subscription box geared towards gamers, nerds, and geeks has been around since 2012 – but is it still good enough to keep up with fandom-loving millennials and Gen-Zs?

Well, that’s why we did a little investigating.

What Is Loot Crate? 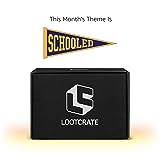 Think of Loot Crate as “comic-con in a box.”

It’s a monthly subscription box service that ships out boxes of geek- and gaming-related products with the mission of uniting and inspiring the world through a shared passion for fandom.

The company partners with leaders in the entertainment, gaming, sports and pop-culture industries to deliver monthly themed crates.

And, the people at Loot Crate make a few key promises:

They are fans first and they understand what it’s like to be a part of a fandom and celebrate nostalgia. So, they work hard to develop special products for “Looters,” as they call their members.
They approach everything with fun and humor.
They strive to deliver consistently amazing experiences around all of their products. Consequently, they welcome feedback – both positive and negative – in order to constantly learn, improve, and provide a reliable and accountable experience that you can trust.
They love their “Looters” and they want you to feel like a friend is sending you a super rad care package every single month.
It’s a company for fans, by fans.

How Does It Work?

Loot Crate functions in a similar model to other subscription box services.

First, you pick out the crate you want and choose a plan within that crate theme. There are all sorts of themes for the boxes – which we will touch on in a hot minute.

You can choose to do a one-, three-, six-, or 12-month plan. And it’s relatively easy to either change your subscription or cancel it entirely.

We should note, however, that certain special-edition crates run on a quarterly basis and you can decide if you want to receive one, two or four crates total. For example, there’s a Deadpool crate on the site right now that functions this way.

Then, the nerds (again, we’re saying that lovingly) at Loot Crate pick out a bunch of exclusive merchandise related to the theme you chose. These products can range from collectibles to apparel to action figures, and more.

And finally, it shows up on your doorstep. Though you picked a certain theme, the unboxing itself is a total surprise because you don’t actually know what the company picked out for you.

So What’s the Deal With the Crate Types and Themes?
When you sign up to receive a crate from Loot Crate, you can pick from four different categories: pop-culture, gaming, film and TV, or Sci-Fi and fantasy.

Within each of these categories are different-themed crates from which you can choose.

For example, under the gaming category right now is a Fallout crate, and under the Sci-Fi and fantasy category are a Star Trek Mission crate and a J.K Rowling’s Wizarding World crate. Or you could get a Marvel-themed crate from the movies and TV category.

You will find a lot of specific, franchise-related crate themes because Loot Crate partners with

The pop-culture category functions a little differently, however.

Loot Crate and Loot Crate DX (which is simply a bigger crate than the first) feature products centered around different franchises and fandoms each month. Loot Wear, as you perhaps could guess, is specifically apparel.

Loot Anime crates include merchandise from the best anime and manga series, Loot Fright is a mix of horror-related collectibles, and Loot Remix sends out past Loot Crate collectibles at the site’s lowest price point.

In other words, you have a lot to choose from.

Now once you pick a crate, you will only get crates from that theme throughout the duration of the subscription plan you choose. So if you went with the Loot Anime crate, and then picked the three-month plan, then you will only receive anime-themed crates over the next three months.

Once those three months are up though, you can choose a different crate.

This part is kind of unfortunate – especially if you don’t like the crates you are currently receiving. But we can see how it would be a logistical nightmare on the company’s end to switch up everyone’s crate shipments part way through a subscription period.

However, if you originally chose to receive a crate for three months and then decide you want it for an entire year, you can easily go to your account page and click “Upgrade.” You will be billed upfront for the remaining cost, but you save more money overall than when you stick with a shorter plan.

And that transitions nicely into our next area of discussion: the pricing.

How Much Does Loot Crate Cost?

So, the pricing is a bit tough to talk about in a general manner because there isn’t one flat rate for the different subscription plans.

No two crates cost the same amount, in other words.

Now, as another example, the general pop-culture Loot Crate costs $ plus shipping for a subscription that last months.

For more specialty crate, the cost goes up. The Marvel-themed crate (which is one of the themes that functions on the quarterly system instead of the monthly system) costs $ per crate plus shipping IF you decide to only receive a single crate.

However, if you decide you want to receive three Marvel crates within a calendar year, the per-crate cost is one dollar less.

So not only do the price vary between the different crate themes, but they also change according to the total duration of the subscription or the total amount of crates you opt to receive.

In the long run, it is more cost-effective to choose a 12-month subscription rather than a single month, or to receive four crates in a year instead of two crates.

And, as we noted, shipping is not included.

If you add it all up, it can get pretty costly. Even if you do decide to do a 12-month subscription, you would pay over $300 for the Loot Anime crate – plus shipping fees.

For some people, this is perhaps a small price to pay for gear related to your favorite fandom. But for others, it’s probably not worth it.

The reviews out there on Loot Crate are quite mixed, to be frank.

There are definitely people who rave about it because they love getting swag for their favorite fandom. After all, the company currently has a 4-star rating on Influenster.

But the number of stars seriously varies from site to site. Some sites where customers can post reviews have an average of 3.5 stars, others 1 or 2 stars.

That being said, if you scan through reviews on a number of websites there are a lot of customer complaints about delays in receiving the subscription boxes – and then not being informed that delays are occurring. There are also account of people signing up for a crate and then straight up never receiving it.

And that really sucks because you have to pay upfront for all of these crates.

We even saw one customer review that joked it should be called “Loot Wait” instead of Loot Crate.

The customer service also is not great when these kinds of issues arise. Either people have gotten no response at all, or very vague answers. Some people have even claimed to have had trouble getting their refunds quickly when don’t receive their boxes or when their items missing from their boxes.

Also, some longtime Loot Crate subscribers say that the quality of the products has been in decline. Plus, some months you might get a crate full of stuff from a fandom that you really don’t care about.

Either you get a really great box full of tons of stuff you like, or you get a late box with items missing.

Perhaps the company started out strong, but recently it seems to be in a bit of a downturn in terms of quality and service.

What We Think About Loot Crate

We are optimistic that there is a chance you will have an amazing experience with Loot Crate and get tons of products that you love each month.

But it’s pretty clear to us that it’s all a bit of a gamble.

First of all, even if you do receive a box on time with no missing or damaged products inside, there is still a chance you won’t like anything inside it.

Second, there’s a chance your box is late, items are missing, damaged or of poor quality, or you never receive it at all. And then there’s the added chance that you will have a really difficult time with customer service and wait forever to get any sort of refund.

With all of the various crate themes and options, and the different subscription durations, we almost wonder if the company has spread itself too thin and is having trouble keeping up. After all, they develop a lot of the product on their own or in partnership with big-name franchises. Maybe it’s all a lot to juggle.

We guess it really comes down to how much value you place on getting random swag related to your fandom of choice, and how patient and trusting you are.

Nevertheless, we aren’t taking to the streets to tell all of our friends, family and neighbors about Loot Crate.

But at the same time, we don’t want to write it off as an entirely hopeless endeavor.

If we were to give it a letter grade, we would probably give it a C.

So, yes, we stand by our initial statement.

You can certainly subscribe to Loot Crate, but do so at your own risk.

Get the Latest News